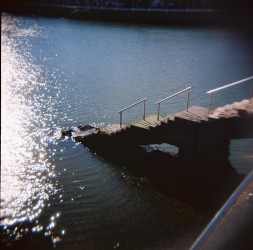 A Weekend in Bilbao, Spain I went with two friends to Bilbao last weekend. It was a four day weekend due to the many holidays celebrated by the Spanish. It provided a much needed escape from Madrid. We traveled four hours to the city in the North of Spain where we met two more friends I know from college who were doing a European tour. We spent the afternoon walking about, ogling at the architecture, and exploring the Guggenheim museum. The Guggenheim’s architectural feat is impressive in and of itself, but the art of Andy Warhol and Picasso, as well as permanent modern art exhibits inside made the trip even more worth while. Whenever and wherever I am traveling I always love to go to the art museums. It’s generally my first stop on the itinerary. I feel like I could spend hours staring at the art inside, and admiring the buildings that they’re protected by. Fine art varies so much from region to region. You can learn a lot about history and culture through it.

Bilbao is an interesting city because of the juxtaposition of the modern architecture in contrast with the old classical Spanish buildings. The following day we went to the city of San Sebestian. Stay tuned!

Deena Danielle features a creative female entrepreneur each week. She highlights women around the world in industries such as blogging, photography, design, social media, and more! Each episode delves into the guest’s inspiration and what fuels their desire to create.

In episode #024 I’d like to introduce Renata Helfman to the podcast. Renata is the founder of Lipstick Angels a charity that partners with hospitals around the country to offer pampering services to cancer patients. Renata began her career as a celebrity makeup artist and went on to create Vert a clean beauty store. The […]

RP: bc I feel like this deserves so much more hype 🥀✨ #fyp #tiktokfashion #fashionblogger

You can find out more about which cookies we are using or switch them off in settings.

This website uses cookies so that we can provide you with the best user experience possible. Cookie information is stored in your browser and performs functions such as recognising you when you return to our website and helping our team to understand which sections of the website you find most interesting and useful.

Strictly Necessary Cookie should be enabled at all times so that we can save your preferences for cookie settings.

If you disable this cookie, we will not be able to save your preferences. This means that every time you visit this website you will need to enable or disable cookies again.