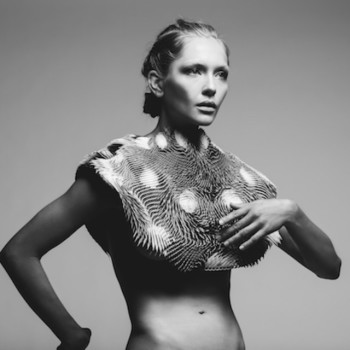 I was lucky enough to stumble across Behnaz Farahi “Caress of the Gaze”. What struck me about the work by the 3D designer and architect is the seamless integration of art and science. She is based in Los Angeles. Her work pushes the limits of how we traditionally define immobile objects. Imagine clothing as something that responds and reacts to the person who perceives it. Farahi’s 3D Printed Gaze Actuated Wearable does precisely this. The vest piece that covers the shoulders and chest is made of porcupine like monochromatic quills. It is also equipped with a small hidden video camera that observes its surroundings.

The video (filmed by Charlie Nordstrom & Elena Kulikova) shows the model moving ever so slightly, accentuating the flow of the vest. The model’s make up is a mirror of the tones of the piece. As the vest shifts, it responds to the man’s eye movement in front of her. The camera flows up and down flawlessly displaying the key elements of the design. There is a synchronicity in the video between the flexing of the vest, the tones, and the music that is reminiscent of a dance.

Behnaz Farahi’s designs extend to walls, and architecture, incorporating the same elements of movement in these usually stationed designs. Behnaz Farahi is really thinking outside of the box. I am so happy to see evolution in design by great artists turned inventors. This provides a lot in the way of sustainability because this vest has so many uses other than just clothing.

“Her goal is to enhance the relationship between human beings and the built environment by implementing design/motion principles inspired by natural systems.” – http://behnazfarahi.prosite.com/204244/gallery

You can find out more about which cookies we are using or switch them off in settings.

This website uses cookies so that we can provide you with the best user experience possible. Cookie information is stored in your browser and performs functions such as recognising you when you return to our website and helping our team to understand which sections of the website you find most interesting and useful.

Strictly Necessary Cookie should be enabled at all times so that we can save your preferences for cookie settings.

If you disable this cookie, we will not be able to save your preferences. This means that every time you visit this website you will need to enable or disable cookies again.